I inquired Amazon about it and they have been able to reimburse the missing 26 units for one particular ASIN in that same shipment. No luck with the other ASIN of which 56 units are missing! Their response was:

Upon further investigation, we have found that the units mentioned below are marked as “Investigation Completed – shipment contents counted and confirmed”.

When receiving items in the fulfillment center, we physically count units being received. If we find quantity discrepancies between what we received and what was expected per the shipment details, we initiate a second physical check to re-count the units received.

Items are marked “Investigation Completed – shipment contents counted and confirmed” in Seller Central when we have completed the second physical check, and the quantity discrepancy still exists.

In response to your request, we have completed a further review. This review confirmed that we have no record of receiving the units in question, therefore no reimbursement for these units will be issued.

The shipment is closed now;

I sent the shipment in full after labelling, they have the complete invoice that shows all the units that should have arrived. My guess is that UPS lost some boxes but, shouldn’t that be covered by the insurace?

A bit lost here, any help would be appreciated

is this a multi-boxes shipment?

We avoided sending in more than 3 SKU per box and more than 1 box per shipment. Even with that, we had SKU counted incorrectly and transfer between shipments! So 1 SKU will be 2 short on 1 shipment but over 2 on the other. Which we know is not possible as it won’t fit in the box!

So depends on what the value of the SKU and how they were sent in. You might want to write MD.

This is around £1000 worth of inventory. Yes it was multiple units in multiple boxes. The tracking information clearly shows 5 boxes were sent but not delivered, they got lost somewhere in France. I would rather avoid the MD if I can, I’ve never tried and I’m not sure how to approach them.

Do I have any alternatives?

we just got an email from head of FBA saying the limit on FBA has been lifted. if you got that email, then may be try him first.

Not sure what else to suggest. They can dig their heels in and …

as it is with UPS, it is Amazon that needs to take charge. I will try write to higher up… MD or head of FBA etc to get redress since you already tried SS.

Nope, Spain to UK. The tracking in the boxes shows 5 of them as being somewhere in France.

ok… so the tracking show 5 of them not yet arrived? is re-concilliation window started? I cannot see it can as the whole shipment not yet checked in.

Yep, I can see the window, no clue if I should or not

an you show the “Track shipment” page.

Of course.
These are just two boxes to show you that one was delivered and the other one was not. There are more that show up this way. 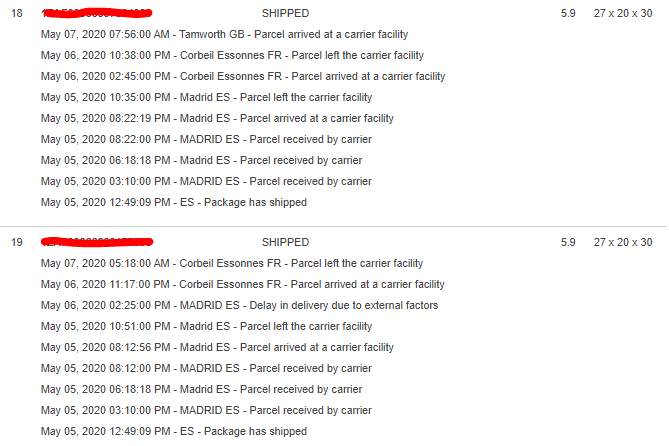 those 2 are similiar, the top one said got to Tamworth (not at Amazon) and another one still at France. so you saying they checked in the first one and did reconcile for the whole shipment even though not all has been received?

This box for example did arrive:

Was it all in the same box or several boxes?

Either way, I’d be going to the carrier now with invoices demanding reimbursement and compensation.

Then legal action against the carrier as item not received by recipient.

it all in the same box or several boxes?

It seems you have not read the thread properly and/or do FBA using UPS as partner shipping.

Either way, I’d be going to the carrier now with invoices demanding reimbursement and compensation.

That is what we discussing now and you are not contributing constructively; more like you are talking out of your hat.

Ok… Open another case if you still can and lay out very clearly to them that the shipment cannot be received in full; thus cannot be reconciled already since only 1 box out of x boxes has been received. If you cannot open case then the only redress will be to MD. However lay it out clearly with screenshots of boxes etc. And what has been lost with attached invoices reference to cases already opened. You need to make it easy and simple for whoever to review your case with everything there; info that they can verify on, that include the payment for the shipment.

Mine too and trying to get a decent answer off amazon is beyond belief. 3 boxes were sent it - 2 of the boxes had 1 sku inside with qty of 30 in each of the boxes - showed as receiving correctly and now dissapeared from my inventory. Trying to resolve is so stressful.
I absolutely hate selling on amazon now - just come back on after 10 weeks and stressed already. Is it worth it?

We have had this before, it is something to do with being checked in. We lost about 10 units of an ASIN, emailed many times with no joy and then they all appeared again about 2 weeks later! Very strange. So many wait if they have not been missing long? We have had this a few times now as well.

I doubt that is the case. It has been over a month and a half and the shipment has been closed.

I replied to the original case with:

Hello, regarding the missing 56 units of FNSKU- XXXXXXXX

The missing units are consistent with those boxes being lost by UPS.
Since the shipment was sent via UPS through Amazon, where can I make a claim for these lost units?

A tip, when you’re trying to communicate through cases