Limited-time free removals in the UK and the EU

To help you avoid storage fees for products that have not been selling and create room for more productive inventory, we are offering a removal fee promotion for a limited time.

We recommend that you take action on the following inventory before the promotion ends:

For more information on how to create a removal order, refer to Remove inventory from a fulfilment centre.

Does any one know what this mean please?

However, if your inventory level for the removed ASINs falls below your sales over the last 90 days, you can send in more inventory

I live in the UK but have an item effectively ‘stuck’ in Spain after EFN was closed down. I did wonder why I had a negative balance on Amazon.es!

Is it possible for me to create a removal order for this to get it back in the UK without paying crazy fees?

Today is 21st April the News came out - why do they announce a promotion from 07th April ?

Fair play though - my completed removal orders since 07th April have £0.00 removal fees !!

Today is 21st April the News came out - why do they announce a promotion from 07th April ?

They sent an email right at the start. It could be that they’ve now got capacity so are reminding everyone, or it could of course be that they “forgot”.

They sent an email right at the start.

Another back-door promotion then !!

My removal orders have just been created for my DOC stranded inventory 375 units !! happy days here

Is it possible for me to create a removal order for this to get it back in the UK without paying crazy fees?

Not really. You can get it sent back to an address in Spain for free, but not direct back to the UK for any fee through Amazon.

I think what they mean is that generally you cannot send those items back in for 90 days (or i think i saw 8 weeks mentioned somewhere), but should you later have less in stock than you would normally sell, they will let you re-stock.

I think this is to prevent people using Amazon for cheap storage for items that don’t sell.

Amazon will tell you how many you can send in via the Recommended restock inventory.

Just wish there was a way of condensing them, the storage unit reception my returns go to were less than impressed with the 27 boxes that arrived today, some RM, some hermes, some dpd and some amazon … and some with only one item in lol sooooo much cardboard!

Free removals - amazon can send one unit per box for all I care. At the end of the day, the more boxes amazon return, the more they are losing money on return shipping,

The added Bonus - the more boxes and filler paper that amzon return means the more I can re-use that with my own orders - free packaging !!

Not when they send 1 item per box, they’re not big enough to reuse lol

Not when they send 1 item per box, they’re not big enough to reuse lol

fair enough - depends what your selling

At least they (amzn) are using a box to return fba stock - and not a paper bag / or polybag !!

I only do FBA or fbm greetings cards, the paper is useful granted, they’ll get all that back!

Fab, I’ll get the next lot sent to my neighbour I dont like ‘by accident’

Seriously though thats useful, thanks

They did this last year and it was a nightmare.

I removed some toys in August 2020 not knowing there was a free removal promotion on. I then found out that I could not send back in ANY of these toys after the normal 8 week period (they were blocked indefinitely) and therefore missed most of the Christmas period. I think I managed to get them back in in the middle of December, but only after complaining for about a month.

I have just removed about 10 units 13th April and I am worried I will not be allowed to send them back in again for another indefinite period.

Can we get some clarity on if there is a block on returning units this time or will it be the standard 8 week grace period before returning them in for FBA? 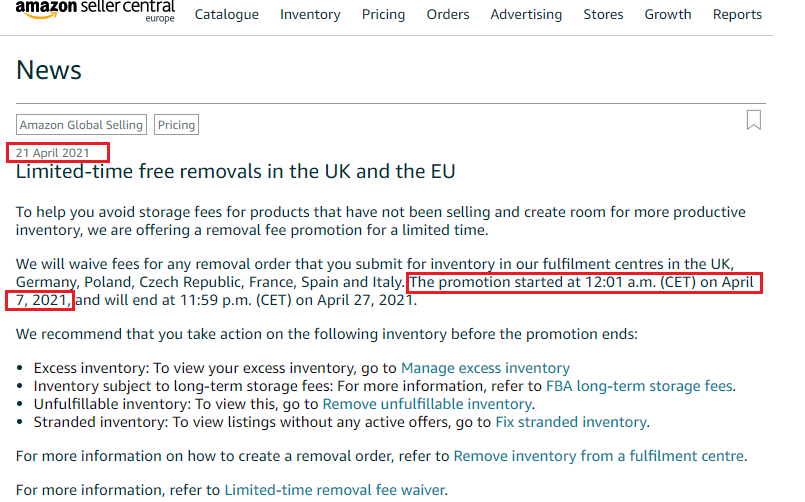 That is what I am asking… Its 90 days this time.

We have to remove e en selling lines as our limit got slashed to a quarter.

Of course some as soon as we removed them, the replenish showed up! Hence I a asking about the paragraph earlier on.

We had 1 vaN load per day for last week or so.